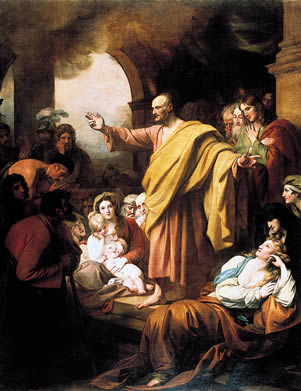 What is true repentance? This morning I read Matthew 26 and as I reflected on it, I was struck by Matthew Henry's commentary on Peter's denial of Christ. Henry writes, "Peter wept bitterly. Sorrow for sin must not be slight, but great and deep. Peter, who wept so bitterly for denying Christ, never denied him again, but confessed him often in the face of danger. True repentance for any sin will be shown by the contrary grace and duty; that is a sign of our sorrowing not only bitterly, but sincerely."

In Thailand, I have seen far too many professions of faith that bear no fruit. I have also heard too many Christians misdiagnose the problem of people who profess faith in Christ but don't follow through. One suggestion is that these backsliders need more encouragement. Another suggestion is that they need more follow-up and discipling. Both of these may be true to a degree depending upon how we understand the terms but neither seem to get at the heart of the matter that genuine repentance has likely not occurred. Repentance is not only stopping doing something bad but is also the beginning of doing something new. As Henry points out, Peter not only ceased denying Christ, but he also did the exact opposite - stood up and boldly proclaimed him from that point onward. Repentance does not consist of merely admitting to, or confessing ones sins either to God or to others. Repentance is a decisive turning from evil and self, and towards God. Granted, some new believers exhibit more obvious repentance earlier on because of the gross nature of their former life while others seem to grow or change more slowly as it is less obvious elements, like attitudes of the heart, which need the most change. But in either case,

there is a definitive turning. If this change is missing in the life of any supposed Christian believer then, Biblicially speaking, it is not possible to call that one a Christian (regardless of what label you use to modify the term Christian, i.e. nominal, backslidden, carnal, immature, not growing or what not).

The most helpful thing that a Christian believer can do to help a professing Chrisitian who does not appear to have repented is to kindly yet firmly talk with him, opening the Scriptures, and help him see the true state of his heart before God. The book of 1 John was written to help professing Christians have assurance that they are saved (cf. 1 John 5:13) and if we have doubts as to someone's conversion, some time in 1 John will hopefully help to either comfort or convict.

"And by this we know that we have come to know him, if we keep his commandments. Whoever says “I know him” but does not keep his commandments is a liar, and the truth is not in him, but whoever keeps his word, in him truly ethe love of God is perfected. By this we may know that we are in him: whoever says he abides in him hought to walk in the same way in which he walked." 1 John 2:3-6 (ESV)

The Westminster Shorter Catechism also helpfully summarizes the Biblical doctrine of repentance so that, in a nutshell, we might know what it is that we it is that we should be looking for in the lives of those who profess Christ.

87. What is repentance unto life?
Repentance unto life is a saving grace,1 whereby a sinner, out of a true sense of his sin,2 and apprehension of the mercy of God in Christ,3 doth, with grief and hatred of his sin, turn from it unto God,4 with full purpose of, and endeavour after, new obedience.5

True repentance is a beautiful thing, as illustrated by the life of Peter who, after being brought to the end of himself, was a new man: humble, yet bold and God-confident, not self confident. Profession of faith without true repentance, however, is an embarrassment to all who call themselves Christians and a defamation of the character of God.